There are a lot of other places where I post things lately. I'm trying to get in the habit of cross-posting. Thus, here is a video that I put on YouTube this morning:

It is also posted on my Barbarian Group blog and the Meerkat Media blog. Other fun things are in those places too! And now you know.

After a satisfying dinner from Sushi Yu, Martha and I went to Terrace Bagels to stock up on some of Brooklyn's favorite breakfast food. Upon arriving at home, I went to put them in the cupboard and realized that I still had a few left over from the last batch I bought. Antics ensued:

Note: This time I only bought half a dozen.

Over the weekend, I helped the Meerkat Media Arts Collective make a film in 24 hours for the New York Film Race. We actually finished on time, and we had a blast. Here's the final product:

Here is a picture I took in White's City, New Mexico: 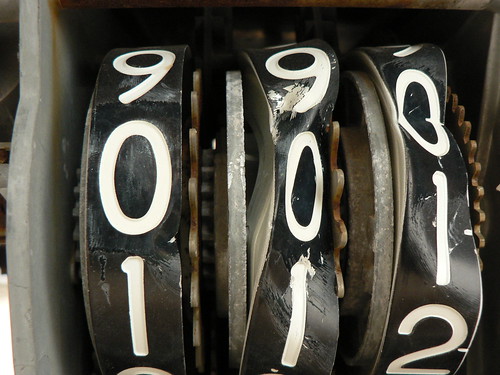 And here it is on the wall of the 111 Minna Gallery in San Francisco as part of Flickr's 4th birthday celebration: 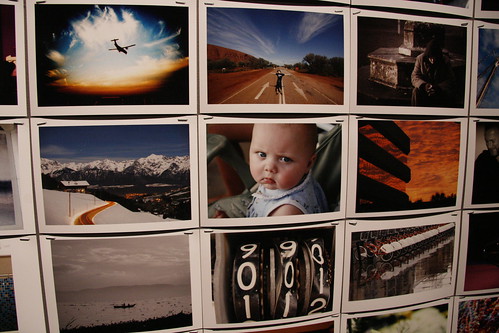 The details of how this happened can be found in the Flickr Turns 4 group, and there's a wrap-up of the event on Yahoo's corporate blog.

All this information comes thanks to Flickr's new stats feature, which is also how I found out about pictures of mine being featured on the front pages of Gothamist and GTAGaming.com.

In my search for videos on the Internet using the strata-cut animation technique, I was quite surprised that MySpace delivered something that wasn't the lowest common denominator of Internet content. Observe:

(ETA: This is what inspired my search)

I keep having these amazing weekends and failing document them in any tangible form (besides Flickr), so here is some information about my Friday and Saturday:

This evening marks the inaugural production of The Best Damn Coffee Frappes In Brooklyn, accompanied by some pizza-making and a halfhearted attempt to watch the Oscars. Care to join? 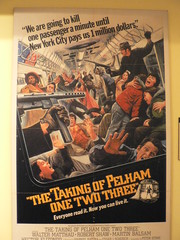 While researching the details of this movie and its most recent butchering remaking (starring Denzel Washington and John Travolta, set to be released in 2009) I couldn't help but notice how painstakingly detailed the goofs section is on its IMDB page.

What's even more entertaining is that there was a made-for-TV remake in 1998, filmed in Toronto, for which the goof list is nearly twice as long. It's interesting to compare the two and see which errors were necessary plot points, thus showing up in both, and which were just carelessness and bad research on the part of the respective filmmakers.

By the way, the photo at left was taken at the New York Transit Museum, which I recently visited and wholeheartedly endorse as being awesome. Are you surprised?

I'm going to post the worthy photos in small chunks, I think—hopefully over the course of the next week or two—so be sure to check my Flickr often if you're curious.

Martha and I curled up by the fire last night (actually, the soft light of Law & Order: SVU) and sketched out a rough draft of our upcoming tour of the American Southwest. The tentative plan is as follows:
The trip will take about 8 days total — 3 on the train and 5 days of driving. This plan is certainly subject to change, especially considering its ambitiousness. Though I've mapped the route on Google Maps, and it seems doable, provided we can get camping accommodations at Big Bend, the Guadalupe Mountains, and the Grand Canyon, and a hotel in Albuquerque. Of course, any recommendations on alternate routes other stuff to see would be welcome. We're hoping to make it happen around the end of January.

BTW, Google Maps' "drag to customize your route" feature is so fucking awesome. How did people plan trips before it existed?
Collapse